Purba Das, a 13-year-old artist from Kolkata, paints bricks as she dreams of a proper home.

We catch Purba Das on the phone just as she is about to leave her teacher Supam Adhikary’s house. He warns us that she isn’t as fluent in Hindi as she is in Bengali. However, she sounds confident and excited as she tells us that she loves to paint and studies in the 9th grade at the Barisha Purbapara High School in Kolkata. She also has a younger brother, who is six-years-old.

Supam takes over from there as he tells us about the 13-year-old’s journey as an artist, having her work exhibited at a group show in Lalit Kala Akademi and being represented by New Delhi gallery Art Inc, run by Renu Rana. 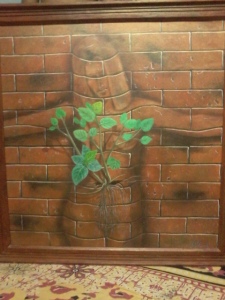 In the true “guru-shishya” style, Supam has taken on the young teen as a project, impressed by her sheer talent. A professional artist, he first met the family through Purba’s father, Pran Krishna Das, who sells ice to store fish. He recalls, “I had gone to her father’s shop to buy fish and he told me take a look at the aquarium in his home. When I went there, Purba’s mother asked if I could teach their daughter. At first, I refused, since I only teach adults. But then, I saw her paintings and I realised she was a true artist and could have a bright future.” While Supam teaches her for four hours, twice a week, Purba spends a couple of hours each day, painting. She usually paints on canvas, using acrylic paints. Purba’s works are prompted by her everyday realities. A series of paintings use bricks as a backdrop as she lives in a thatched hut. However, her mother Kabita, informs Supam, has recently taken a loan to build a proper house with iron rods and bricks. A part-time nurse, she takes on extra shifts at the hospital she works in, to be able to afford paints and canvas for Purba.

The teen is also working on an artwork, which depicts a giant comb with broken teeth at the end of a field, at the centre of which sits a girl reading, while two birds sit upon a milestone. Says Supam, “I asked Purba where she got the idea. She said an aunt had hit her with a comb because she was lost in her painting.” Her artwork in Lalit Kala is more cheerful and depicts Hindu deity Krishna and his consort Radha talking through Coke cans turned into earpieces.