Some Sundays ago, I decided to drop in at the Mumbai’s famous Shiv Sagar restaurant, recently opened at Janpath, New Delhi. 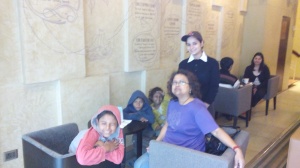 Some Sundays ago, I decided to drop in at Shiv Sagar restaurant, well-known in Mumbai and recently opened at Janpath, New Delhi. While I waited in the queue outside for my turn and for my friend to join me, I was approached by a kid selling pens. His name was Sagar. I wasn’t interested in buying the pens, but he asked if I could take him inside the restaurant. He also had a friend called Shiv, he told me. Yes, surreal, considering we were talking about going into Shiv Sagar. 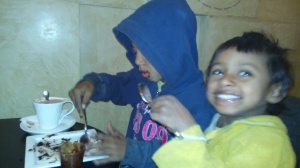 I asked the person at the door, who refused. I asked him what the problem was, since he would be sitting with me. He called his senior, who pleaded with me, saying the kid created a ruckus. I told Sagar what he’d said, and he replied (truthfully!), “But that’s just outside, not inside.” Anyway, he asked me to take him to Cafe Coffee Day, a little ahead, since “the didi there is nice”. And she was! We were welcomed warmly. The “didi”, a young girl, also asked him where his friend Shiv was and he went running to find him. Later, Sagar’s sister Sapna also joined us. The staff was wonderful, suggesting what the kids would like and posing for pictures with them. Sagar, of course, hadn’t forgotten the insult at Shiv Sagar. His words, “Unko kya pata garibi kya hoti hai (What do they know about being poor?)” He must’ve been about 10 years old and angry as hell. I asked him why he would want to go to a place that didn’t want him anyway. He agreed, “Kisi ko nahin jaana chahiye (Nobody should go there.).” The three had their chocolate cake and brownie, along with cups of hot chocolate and french fries, which they insisted on eating with forks, even when I suggested they use their fingers. Sagar, continuously admonished the other two, telling them to behave, sit properly and not drop anything. In between, he would remark, “Mazaa aa gaya“!

Some time later, back at Shiv Sagar with my friend, I asked for the owner’s contact details. The senior manager came up to me and asked what the matter was. When I told him about Shiv and Sagar, he promised they would be invited inside. He would phone, he said. But, I’m still waiting for the call! So is Sagar, I suppose!

(The writer is an editorial consultant and co-founder of The Goodwill Shop, a platform to promote products from NGOs, artisans and socially responsible groups.) 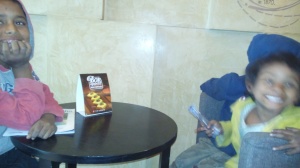 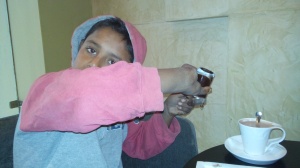