A disability couldn’t cripple Navin Gulia’s spirit. A mountaineer, writer and social worker, he believes, “If we think we can, we can.”

An adventurer, writer, social worker and a motivational speaker, Gurgaon-based Navin Gulia has had his fair share of ups and downs. As he wheeled himself into the room, the first thing that struck me was the vibrant energy along with a soothing calm that surrounded him. Always raring to go, being still is not in his nature. “He always says that if your mind is strong than physical strength is immaterial,” remarks Gulia’s proud father. For Navin Gulia, victory over the self is the ultimate victory. An athletic Army aspirant, Navin Gulia had his career cut short when an injury in 1995 left him paralysed from the neck down. Though gradually, some feeling and movement returned to his shoulders and hands, he was still paralysed from the waist down. Taking this in his stride, Gulia decided to reclaim his life. He prepared himself to face a future that would be both fulfilling and inspirational.

And, at the age of 24 years, he turned his disability into a life-affirming force, stretching beyond physical abilities and thereby inspiring people of all ages. Defying expert prognosis, he got himself a wheelchair and with a 100 per cent disability tag and little movement in his hands, he completed a Masters in Computer Management in 1999 from Symbiosis University in Pune and won a local chess competition. He started giving motivational talks across the country and learnt to drive and, when the city roads were no longer challenging, motored through the highest passes in the world—the Khardung La (18,340 ft.) and Marsimik La (18,634 ft.).

In fact, he also holds the record for being the first person to drive non-stop for 55 hours to Marsimik La in September 2004, which is the highest motorable mountain pass in the world. He designed a set of controls for steering the car that he drove to Marsimik La with limited hand movements. Last summer, he drove down to Kargil via Kurukshetra, Mohali, Manali and Leh. According to him, “Our body and mind have infinite ability. Our ability never restricts us, our thoughts do. If we think we can, we can. If we think we cannot, we cannot.” 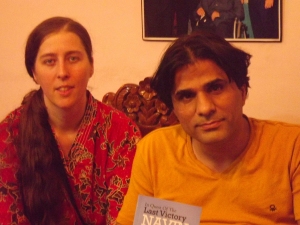 Telling people to not give up is one thing; exhibiting the same through decisions and actions is another and Gulia chose the latter. He proved to the world that he can do what he exhorts people to do through his motivational talks.

Because of this indomitable spirit, Gulia was the recipient of many honours and awards. In 2006, Dr APJ Abdul Kalam honoured him with the President’s National Role Model Award. Other awards include Godfrey Phillips Mind of Steel Award in 2010, Karamveer Puraskar in 2009, CavinKare Ability Mastery Award in 2006, Chief of Army Staff Commendation in 2005 and Times of India Global Indian of the Year in 2005 among others.

Then one night in 2005, the sight of a little girl in a parking lot, dressed in rags with no shoes and shivering in the harsh Delhi winter, gave him a new purpose in life. Gulia had always wanted to do something for underprivileged children and this incident spurred him on to take immediate action. That he had no funds in hand was not a major hindrance for him as he believes that if one has to do something, then one should just go ahead and do it. Things will fall into place after that. When I asked him how he could be so sure, he simply said, “I did not know how I would do it but that I would, I was very sure.”

And, with no resources at all, he stared AADA (Apni Duniya Apna Ashiana) in Gurgaon to help, assist and guide underprivileged, orphaned, abandoned and differently abled kids. “It is unnatural to take children away from their homes and then try to make their lives better. Why can’t we go to their homes and help them?” asks Gulia.

AADA is all about making sure those underprivileged children have access to education and a better life in their natural environment. Today, there are around 70 children in the centre. Though the space for the centre was provided by the government, there were absolutely no funds initially. The many difficulties and challenges over the years while running AADA were a humbling experience for Gulia and he admits that it has given him tremendous joy and happiness. People were sceptical and hardly anybody came forward to support him in this endeavour. But Gulia got around this problem by ensuring that there are no administration costs.

“The centre is run entirely on volunteer support and donations are used judiciously to get maximum benefit from minimum resources,” says Gulia who also visits six nearby villages to help the differently-abled. He guides them in their career choices and also takes care of their medical needs and living expenses. Today, AADA has many volunteers some of whom are from other countries. Donations have also started trickling in. His is a shining story of turning a disability into a strength and we wish him more power!