Celebrated composer and director Vishal Bhardwaj looks back on the dark phases that marked the turning points of his life. Excerpts from the book Directors’ Diaries—The Road To Their First Film, by Rakesh Anand Bakshi, published by Harper Collins India.

Celebrated composer and director Vishal Bhardwaj looks back on the dark phases that marked the turning points of his life. Here are excerpts from an interview featured in the book Directors’ Diaries—The Road To Their First Film, by Rakesh Anand Bakshi, published by Harper Collins India.

Rakesh Anand Bakshi: Let us now travel back in time, to your origins; where were you born and brought up?

Vishal Bhardwaj (VB): I was born in Chandpur, near Dhampur in district Bijnor, UP. Then we lived in Najibabad. From sixth standard to twelfth, we lived in Meerut. Though I have roots in UP, I consider myself a rootless person.

What about living in Meerut or UP has influenced you as a filmmaker?

VB: Meerut is where I met, and was familiarized with, the world and characters I created in my fourth film, Omkara (2006). Meerut is where I first fell in love (smiles), and was exposed to great poetry. I was studying in a government college, and kids from all sections of society came there. My father wanted me to shift to an English medium elite school. But by then I had made many friends, so I did not want to change schools. However, after the twelfth standard, I regretted my decision of not shifting to an English-medium education, because English had become a very important language by then. Sadly, some people in our country suffer from a complex because of that; if you do not speak good English, you are ridiculed by those who speak it well. I suffered because of that; when I would be in a group of friends who spoke English fluently, I feared being ridiculed for speaking Hindi or English that was not good enough for them, so I spoke very little.

At that time, I regretted not knowing English properly. However, now I feel if I had taken up the elite education my father wanted me to have, I would not have been able to create the world, the milieu, I set Omkara, and so many other films, in. For example, a character like Langda Tyagi reflected some of the people from my school and college years.

In small towns, even the paanwala, the mithaiwala, are characters that leave a lasting impression on you by their nuanced habits, colloquial language, etc. I have observed keenly that in north India people generally speak as though they are characters performing in a theatre, or reciting dialogue from a play or a movie. (Laughs) They love to flaunt colloquial words and phrases to such an extent that even their day-to-day normal conversation is punctuated with some amazing dialogue-baazi and old proverbs and what not. (Laughs) In hindsight, another great thing that happened was that near my home there was a little slum and the slum kids were my friends.
From them, unknowingly, I learnt so much about their everyday existence, their needs and their dreams. One of my childhood friends is a hand-rickshaw puller. I must have been in the ninth standard, and yet I noticed there was discrimination against him.

Anything else from your past that has influenced you greatly?
VB: Riots. I was in college, in Delhi, doing my first year and happened to be in Meerut for a weekend. I witnessed Hindu–Muslim riots, and it affected me deeply. I realized, on the surface things are calm in our society, but just scratch the surface and you will discover a deep-rooted divide amongst people. Like dormant volcanoes, there is a conflict waiting to erupt. 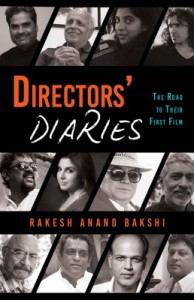 Is it true that you used to play the harmonium during food festivals at Pragati Maidan, New Delhi?
VB: On 7 May 1985, the date is etched in my memory, at Meerut while I was still in college, I returned home in the morning after cricket practice, and saw all our family’s belongings spread out on the street. And my father lying on the street gasping for breath. (Pauses) The house we were living in was rented, and the landlord had obtained a seizure of property order to force us to vacate the house overnight, even though the matter had been settled out of court. I held my father in my arms and amongst our belongings lying scattered on the street, we looked desperately for my father’s medicines, but could not find them. I went to get the doctor. When I returned, I realized my father had been shifted to a neighbour’s house. People had gathered outside the house and as I approached the house I asked them if my father was okay. When I entered the house, it was too late. Even now, when I see a Steadicam point-of-view shot in any film, I travel back. I am reminded of that walk towards the house where my father lay dead.
When this happened, my brother was struggling to establish his own career, and I was still in my second year of college, and I had to arrange money to pay for my hostel fees. Later, after my graduation, my family told me that they would support me financially only if I opened a video library store. I told them I was never going to sit in a video library. I was determined to become a music composer.
I had many friends who were singers. One of my good friends got a contract to sing at the UP Pavilion in Pragati Maidan; it was a daily evening show of one-and-a-half to two hours. He told me we should do this show together, he would sing and I could accompany him on the harmonium; we would sing ghazals, because ghazals were very popular at that time. I performed at food festivals to earn a livelihood; which artiste likes to play music at an event where no one is really listening to you? Moreover, in those days most families did not want their child to be a part of the film industry, because it was considered an uncertain and insecure profession.

I had read somewhere that you were a very good cricketer. Was that your ambition before wanting to be a music composer?
VB: I wanted to become a cricketer; I even played for the Under-19 team for UP. But I soon realized sports is a very expensive career choice, considering the amount of time and equipment you require to remain physically fit, eat right, to practice and perfect your skills. My family did not have that kind of money. After that, I travelled to Delhi to study at the Hindu College.

Any memorable challenge or experience from when you first arrived here (Mumbai) for work?

VB: I used to travel from Andheri to Churchgate daily for work, and from that alone I learnt a lot about life. (Laughs) Just travelling in Mumbai’s local trains teaches you so much. In just two months, it can transform you into a different person. You need to have a certain attitude to just get in and out of Mumbai’s local trains. However crowded the train might be, you need to get in if you want to get to your destination, get closer to your dream. That experience hardens you. Since I was a cricketer I was already a pretty tough fellow. But Mumbai made me even tougher. (Smiles) I still travel by local trains sometimes, even though it’s difficult because some people recognize me. I try to travel as much as I can with regular people, to remain connected with the masses, to be closer to my audience.

(Film scriptwriter, director, actor, author, photographer, swimmer, walker and cyclist, Rakesh Anand Bakshi is the founder of Bicycle Angels, a non-profit social initiative that helps donate bicycles to the underprivileged as a means of livelihood.)